Cold enough for hats :)...and other things I have been doing lately

I have had a lot of fun in the last couple of months making custom hats, which is fairly new for me. I have made sock monkeys, owls, pandas, horses, kitty cats, hats with earflaps, hats with braids, and hats with flowers. It is a good thing I have hats made for my kids because we actually got snow flurries yesterday here. We don't usually get snow that early in the season. The kids were really excited. 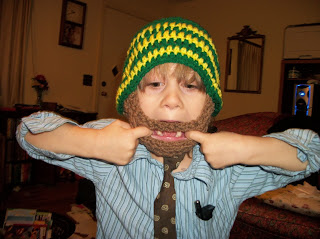 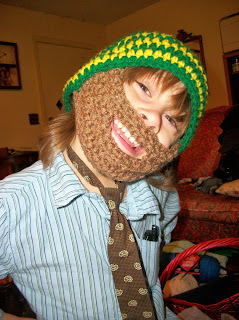 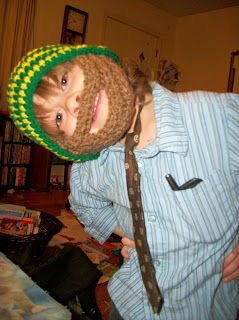 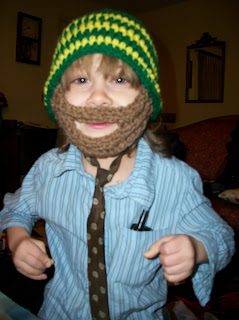 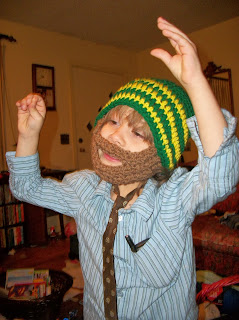 Someone showed me some pics of some really cute beanie hats with beards on them on etsy and asked if I could do that. I said I would try. I found lots of beanie patterns free on the crochet pattern central website. I kind of just made things up as I went for the beard. I used Talon as a model, as well as the girls' fashion doll head. I started with the mustache row and made it as long as I wanted (ear to ear on Talon). On the next row down, I just chained about 10 or so when I got to the middle to make a hole for the mouth. Then I made a couple more rows after that. Maybe 2 or 3. I think it was 3. On the the 2nd one after the mouth opening, I did 2 stitches per stitch for the chin, and then on the last row I just did one stitch per stitch all the way across....someday I might write that out if it doesn't make any sense. To get the texture of the beard I did crossed half double crochet stitches. That means I skipped a stitch and did a hdc, and then I went back and worked a hdc in the skipped stitch. I have no idea if any of the people who sell these on etsy do their beards like this or differently. I really just kind of winged it. As you can see, Talon was really happy with his hat :).


Talon requested his own bearded hat after watching me make a couple for a special order. He said his had to be green and yellow (his favorite colors) with a brown mustache. :)

What I Have Been Working On Lately

I just realized it has been a while since I posted things I have been working on....
I have really enjoyed doing some special orders for some friends. These little hats and baby blankets have been really fun to make. A Lot to Be Thankful For

I have a lot to be thankful for. On Thursday evening, I was on my way home from gymnastics with my two youngest children, Eliana and Talon. It was chilly, dark, and drizzling. As I was merging onto the parkway, the truck spun around across 2 lanes and into the median and crashed into a guardrail. I came out with just a seatbelt burn on my neck and some very minor bruises. Both children were fine. I am thankful for all the people who stopped to help us. I am thankful that no other vehicles were on the road at the time. Things could have been so much worse. If Natasha had been with us, she could have been seriously injured. Her seat is normally right behind the driver's seat. The people who towed the truck said it was totalled 3 times over and they wondered how I walked away without a broken leg. I want to say thank You, God, for protecting us. I have been overwhelmed the last couple of days by the thoughts of what could have happened and how blessed and protected by God that we were. I have spent a lot of time hugging and snuggling my family. My mom and dad are so sweet and have called to check on me several times a day. Praying for blessings for your families this holiday season.