Well, I wanted all of you to be among the first to know...

guessing a due date in mid May 2007, and maybe 4 weeks along right now.

A couple of minutes later, Little One (I guess I will have to change that) said we needed to go to the hospital to get the baby. So cute, she is 2.5. Dancer Girl said she was "100% three times excited" about the baby. We are, too. 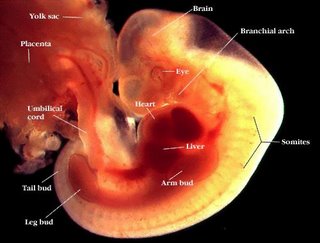 "The embryo?s tiny heart begins to beat by day twenty-one. The brain has developed into 5 areas and some cranial nerves are visible. Arm and leg buds are visible and the formation of the eyes, lips, and nose has begun. The spinal cord grows faster than the rest of the body giving a tail like appearance which disappears as the embryo continues to grow. The placenta begins to provide nourishment for the embryo." So the baby already has a heartbeat, probably, though it would be too early to be heard on a Doppler.

We would appreciate your prayers as baby grows. We are so excited, thank you for sharing this with us!

To Motherkitty and Tomas, congratulations! We know we will probably be getting a late night call from you. Long Hair Daddy took above picture & suggested I blog about it to surprise you guys. I took the test later Thursday evening right after we ate. We will see you tomorrow. The girls and I are so excited about our trip across the state to celebrate Abandoned in Pasadena's birthday. She is my Dad Tomas' sister.
Posted by Alipurr at 8:59 PM

Wow! I feel a little guilty commenting before your mom, but...Congratulations! That's so very exciting!

I am so happy -- can I put in my order for a little boy this time?

I WILL talk to you today when you get here.

Congratulations. I am not as surprised as Motherkitty. I did here you say that you wanted more children. Again congratulations we love you. xoxo

Mazel tov. I hope you have a big healthy baby. How wonderful for you. It's going to be a lot of fun for the girls to help you with the new baby. I'm happy for your parents too, I know how much they love being grandparents. Enjoy your weekend at your aunt's b-day.
Big hugs and lots of love.

thank you everybody! We were so excited that we wanted to post it right away! It was my husband's idea to post it here, because we knew you would probably check in the middle of the night and be sooo surprised! Husband finally had to tell me to go to bed because I kept checking for comments here.... :)

I'm just weeping with joy and I hope that you have a little boy this time...but another little girl will be just fine too. How exciting!!!!
Can't wait to see you this weekend so we can celebrate the new life.

The Four Bears in the Woods said...

Congradulations! That is great news! We are so happy for you all and we will keep you in our prayers!

I can imagine how thrilled Motherkitty and Tomas are! I bet they are so excited about this!

See ya this weekend.

Congrats!!!, I'm really happy for you guys, and wish the best luck on this journey!
Love ya, and please let us know if you need anything.

Hey, what a surprise with the first thing I read this morning. Congrats! And I hope the pregnancy goes smoothly.

Ali we are SO thrilled for you guys!!! Many many hugs and prayers for you and the bebe!!! (and the rest of the fam. too!)
Love,
Lisa-Anne and Andrew

That's exciting news! Whenever I check on your blog, I will be reminded to keep you and new baby in prayer.

I miss you and the girls already. kiss kiss.And a kiss to the new baby.
praying for hubby:)